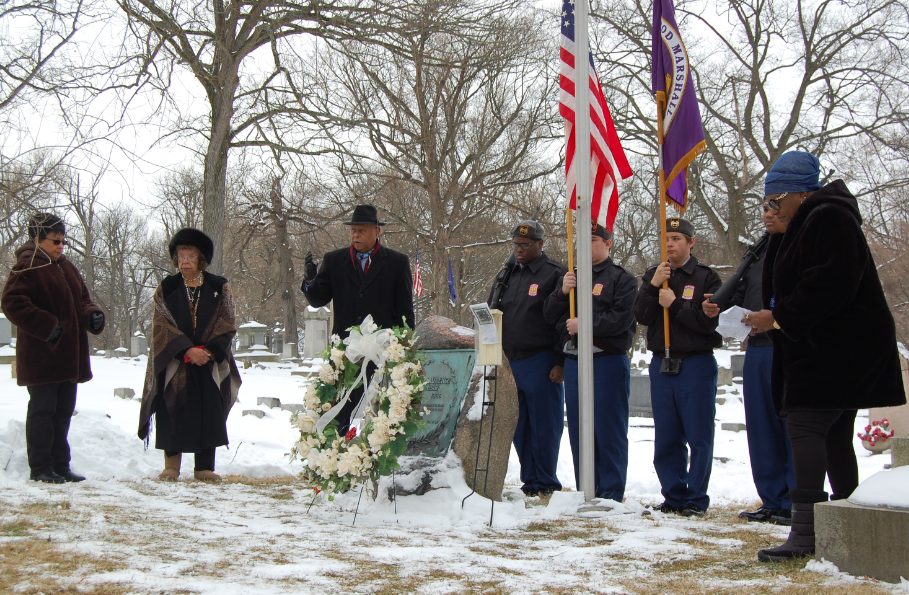 Woodland Cemetery, members of the Dunbar Alumni Association and Dayton Dunbareans will celebrate another annual graveside tribute to Dayton’s own Paul Laurence Dunbar on the day of his death, February 9th.

Paul Laurence Dunbar became the first African-American poet to earn national distinction and acceptance. He was born and raised in Dayton. His short thirty-three years of life were filled with literary achievement and contributions that catapulted him to national and international fame and appreciation.

The President of Wilberforce University and the Wilberforce University Choir rendered the first graveside tribute to Paul Laurence Dunbar in the year of 1906. In 1988, five Dunbar devotees found themselves standing in front of Mr. Dunbar’s grave on the day of his death to pay their respects. The five decided to collectively commemorate Dunbar’s date of death in the future and thus established an annual graveside tribute.

Through the years, the Dayton Dunbar Alumni Association, the National Park Service, Woodland Cemetery and Arboretum and community volunteers have continued to support the annual tribute.  It is through the efforts of LaVerne Sci, a Dunbar scholar who once served as the Dunbar House site manager, that the annual tribute is still celebrated.

“Dunbar wrote with Dayton as his solid foundation and as his reference,” stated Mrs. Sci. “It was in Dayton that he found his richest and greatest experiences and all the elements of beauty and joy that he enjoyed.”

The Annual Paul Laurence Dunbar Graveside Tribute will begin with a gathering at the grave site of Mr. Dunbar at 10:00 a.m. where a laying of a wreath will take place. A short program of readings and stories will then follow inside the Woodland Mausoleum given by devoted friends of Paul Laurence Dunbar.

The event is free and open to the public. All are invited to both the graveside and Mausoleum services. Woodland Cemetery is located at 118 Woodland Avenue off of Brown Street in Dayton. Participants may gather at the front entrance of the Mausoleum for a processional to the Dunbar grave.